Don’t Buy the Hype of this Vanity Metric

It influences each step of the sales funnel.

There aren’t many clear, simple metrics to empirically prove it’s worth.

So people grab on to any metric available.

Most of these become vanity metrics.

They’re metrics, but they don’t really mean all that much.

And this one vanity metric is the king of them all. 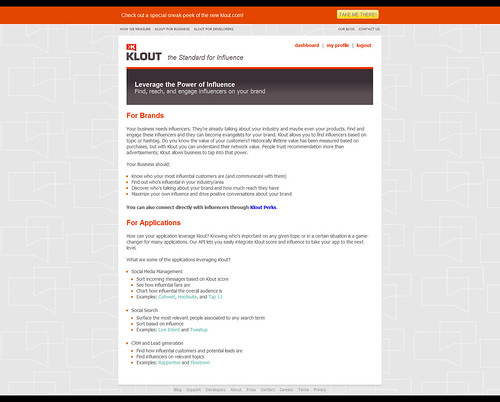 Recently, Klout made some changes and updates to their algorithm. And it sent the social media world into a frenzy.

As you could imagine, there was a lot of backlash.

So it got me thinking about the real value of Klout.

Anyone can easily look at your Klout score and know “how influential you are” and if you’re really good at social media or not.

However that’s also the problem. It takes something as vague as “influence” and human relationships and trys to boil it down to a single number.

So everyone latches on to this idea and obsesses over this metric that in the grand scheme of things, really doesn’t mean much.

Klout scores are a great concept, and provide adequate insight. But don’t take it too far.

So what should your Klout score be? I say just keep it above 40.

It won’t get you any Klout Perks or Social Media headlines, but you won’t be wasting your time either.

Any score over 40 is pretty good, and it shows that you’re active and somewhat influential.

But if your Klout score is in the 70’s, then you should probably just focus on doing more work anyway.

Your Klout score doesn’t pay the bills. It doesn’t drive traffic to your website. And it can’t really measure the real value of human relationships.

So take it with a grain of salt. And focus on real goals instead.